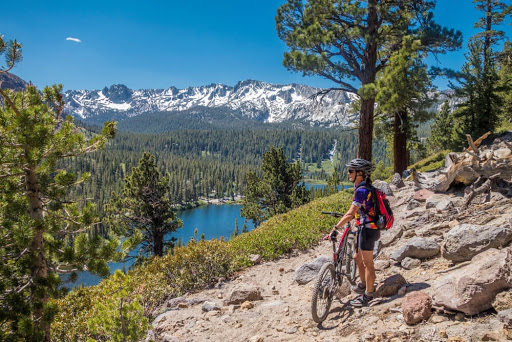 06/30/2020
An Introduction to the Mammoth Mountain Bike Park

Summer is officially here. And there’s no better place to spend your afternoons than the world-class Mammoth Mountain Bike Park, just a scenic, six-mile journey from Snowcreek Resort and its jaw-dropping golf course. The peaceful town of Mammoth Lakes, California, allures nature enthusiasts and thrill-seekers from all across over the world. Mammoth Lakes rests at the foothills of the sprawling, snow-capped Sierra Nevada, just a few miles southeast of Yosemite National Park, one of the world’s most majestic natural wonders. To say that cyclists flock to this region is an understatement, thanks in large part to the Bike Park.

Yes, the Mammoth Mountain Bike Park is named after the towering mountain it sits upon. However, the park’s name is also an ode to the 84 miles of singletrack that winds, weaves, and rumbles down the mountain. The park is, for lack of a better word, mammoth. It’s often regarded as one of the best bike parks in the U.S., a label that locals don’t take lightly.  Many of us know these trails like the back of our hand. Yet, each ride is unique, thanks to the always-stellar valley views, casual erosion, and unpredictable yearly alterations. The lift-served Bike Park welcomes thousands of visitors each year, particularly during summer’s golden radiance. While many cyclists have several years of experience under their belts, the Discovery Zone provides kids and beginners a safe yet fun way to learn the sport.

The Wildest Bike Trails in California

The most enticing draw at the Bike Park remains the “Kamikaze,” a 2,000-foot vertical drop. Cyclists have hit upwards of 65 miles per hour while barreling down this old fire road. With 53 distinct trails, you could visit the Bike Park a dozen times and never touch the same path twice. It’s critical to know your skill level before arrival. Half of the trails are beginner-friendly, while the rest will challenge even the most seasoned rider. Don’t let that scare you away, however, as there are miles upon miles of singletrack that appeal to the masses. If you’re hoping to conquer some of the wildest rides in California, seek out the “Bullet,” “Chain Smoke,” “Twilight Zone,” “Skid Marks,” and the aforementioned “Kamikaze.” At the mountain’s peak (11,053 feet), don’t forget to take a deep breath, admire the beauty, and smile from ear to ear, because you’re in for the ride of your life!

There’s no better place in California’s Sierra Nevada to start and finish a full day of adventure than right here at Snowcreek Resort, home to an array of mountain-style Mammoth Lakes vacation rentals and a state-of-the-art athletic club. Snowcreek Resort rests in the heart of town, less than a mile from four-star restaurants, rustic taverns, a craft brewery, and cozy cafes. Snowcreek Reosrt offers complimentary golf and athletic club access for guests of Snowcreek Resort Vacation Rentals, and over 330 acres of wilderness for mid-day adventures. Our affordable yet luxurious vacation rentals feature full kitchens, fireplaces, high-speed internet, and keyless access. So, please visit us online to learn more about a long-awaited escape to the southeastern rim of Yosemite.